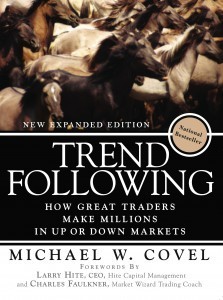 Michael has a great podcast that you can find here; and while it is a must listen, his book is way more important in my mind. First published in 2004, it solidified my trading style for me (which ultimately become my Lazy Trading System and Momentum Trading). I had kind of been doing the trend trading thing but without putting it into words or strong ideas, and with a number of reservations.

Reading the book in 2005 was an aha moment for me – suddenly I knew that I was on the right track. More importantly it confirmed to me that catching and riding the trend was absolutely the best way for profitable trading. The trouble I had been having was a large number of small losing trades while waiting to catch the trend. Reading Trend Following helped me understand that these frequent small losers followed by the occasional big winner was exactly what trend following was about.

The book has a bunch of data that supports the trend following theory and overviews of a number of famous trend follows such as Jesse Livermore and Richard Dennis. What it does not have is any solid trend following systems. It does briefly touch on some right at the end, but if you looking for trend following systems then rather skip this book. In some ways the book seems to be a marketing tool for the products that he sells, but which I do not buy.