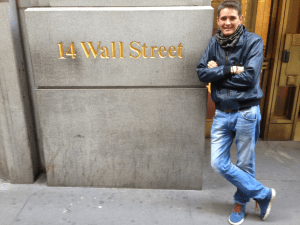 Wow… where do I start?

New York is an amazing place. It has an energy that is impossible to explain. It is vast. It is unlike anything I had ever imagined. Let’s face it though, I am no tour guide and this blog is not about weird people on the subway brushing their hair in such a way that it looks like they’re playing some killer riffs to a crowd of thousands of people at some brutal metal concert (this particular incident will be tough to explain to people… but fun to act out). Anyway… this blog is about trading, and therefore I will stick to the theme. Now, using words is going to be difficult for me, because I won’t be allowed to write 50 000 of them in order to try and somehow capture what Wall Street is like, so I’m going to use pictures.

Before I start though, I want to thank Daniel Kraus (@DanKraus1) for arranging what has so far been the coolest experience of my life. He’s working in a big fancy bank so doesn’t tweet all that often anymore, but follow him anyway because he is one of the coolest guys I’ve ever met. He was kind enough to take me around the Financial District on Sunday and arranged floor access to the NYSE on Tuesday. Daniel, thank you.

It started on Sunday. The idea was to see the Charging Bull of Wall Street. Sunday would be quiet, right? I mean it’s Sunday. 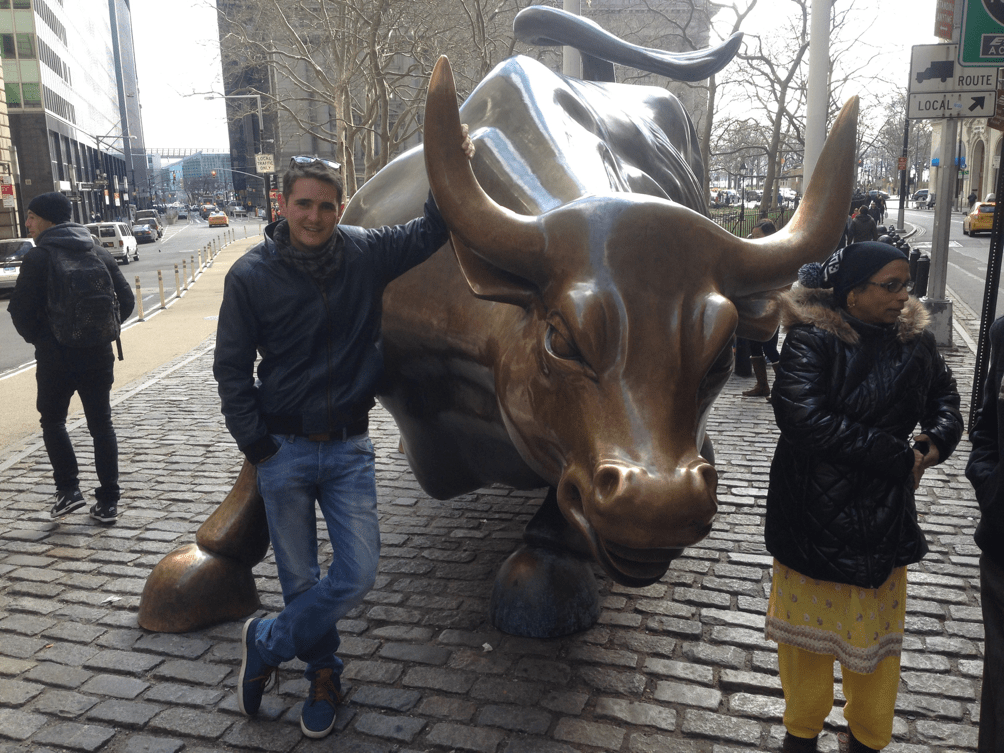 Petri with the Bull of Wall Street (and a stranger)

Nope, crowds. Crowds of course meant that it is nearly impossible to take a picture with the bull without anyone else in the photo, so this person shared my moment with me. I don’t mind though to be honest and I am going to try and go back at night to see if I can get some ‘alone time’ with the beautiful brass bull of brilliance. Also, it is worth following @TheWallStBull on Twitter. He’s a witty tweeter, this completely immobile massive guy, with hooves… just follow him, he knows what he’s doing.

Next up was a general walk around the Financial District of Downtown New York City. Wall Street, the financial centre of the universe!

And of course, the New York Stock Exchange. 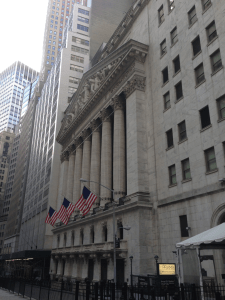 The was followed by conversation with South Africans and some really good honey glazed chicken wings with a blue cheese dip. Yum! Like good Saffas, we drank beer.

And then Tuesday came. Oh glorious Tuesday! Back to the street corner of destiny.

I was a little early so I had some time to take a few photos and grab breakfast at a diner literally down the road from the exchange, so I’m guessing this can be considered a Wall Street breakfast? And then the time came. 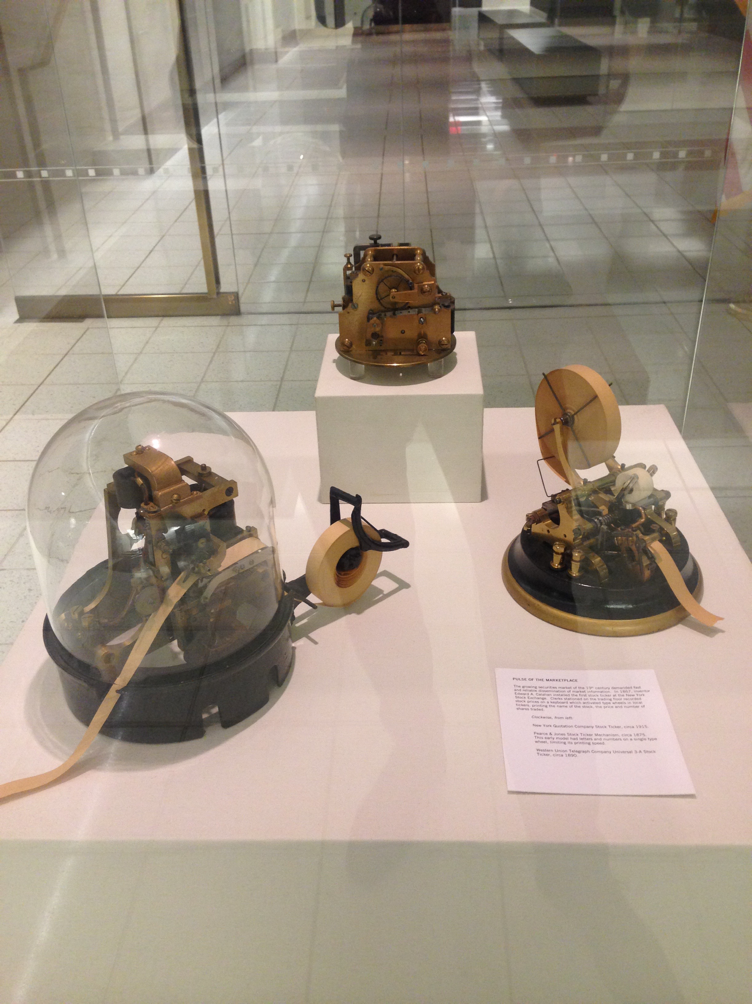 In the lobby are two displays of old ticker tape machines. You know, those things that Jesse Livermore used to ‘read the tape’ back in the 1920s.

Soon the trader we were coming to see came to fetch us and led us through a series of passageways and, you guessed it, more security checkpoints. But, we were on our way.

The sheer volume of trades that takes place on the NYSE is mind-boggling! It’s obviously very advanced computer magic and algorithms, but if you think about how many billions per day are routed here, it’s actually just too much to be able to comprehend.

Being absolutely shameless and talkative, I met a few really cool people as well! Anyone recognise this guy? You should follow him on twitter @PeterPCosta.

So the guys were busy and our time was short. There is no room for distractions on the floor and if you look even for one second like you do not know exactly where you are or what you are doing, someone will ask you, and make sure you know that they are not messing around. If you are not trading, you need to get out of the way. This is Wall Street, there is no time to for games here. I love this place! 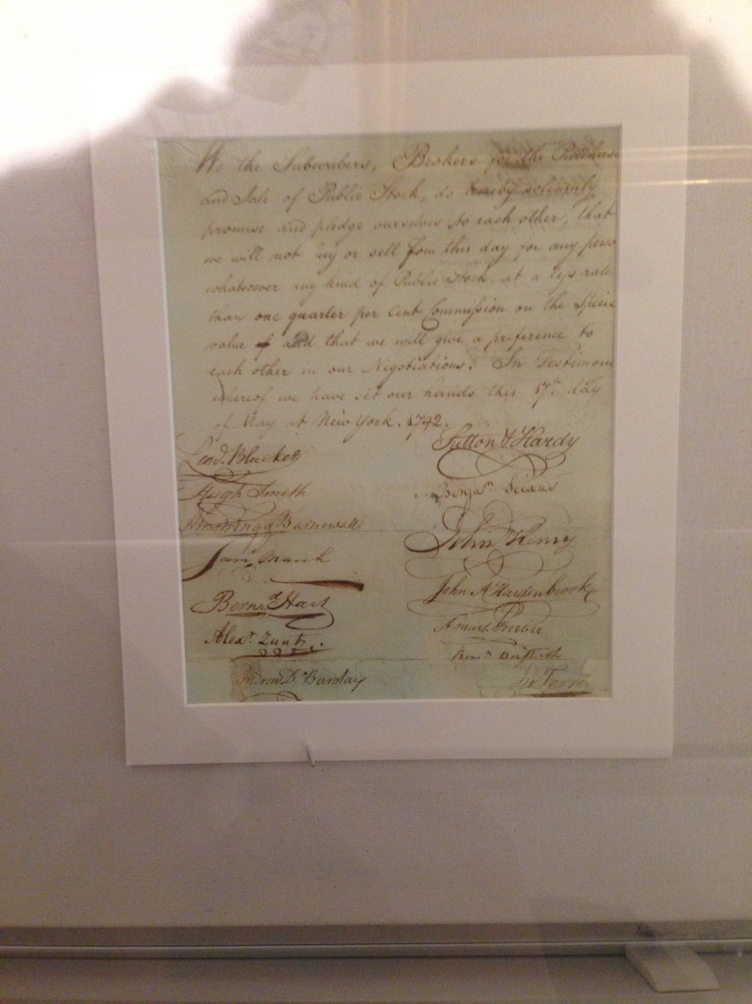 The original constitution of the New York Stock Exchange

After our time on the floor we went through a little museum of sorts, which contained the original constitution of the NYSE. Yeah, the one that was written under a tree. The document that founded the New York Stock Exchange in 1817.

And just like that, it was over. Closing bell, market is closed. It felt like five milliseconds had passed, but in fact we were allowed in, which in itself is a huge honour, and for way longer than what we were meant to be. I still can’t believe it if I think about it.

Next up, SMB Capital.